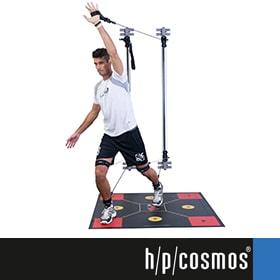 The h/p/cosmos robomove® expander is an elastic cable system for wall mount
and therewith compatible to all kind of treadmill models.

Examples of use include:

Included:
2 nooses for hand or leg
8 srews and dowels for wallmount

The patient’s arms/legs are attached to the elastic cables with the nooses.

By adjusting the angle of support/resistance movement correction is possible.

Adjustment is very fast and simple.

Scales give reproducibility of the adjustments.

vertically or horizontally mountable and adjustable

very quiet & low maintenance, because there are no weight plates

strength and endurance training, even for very fast movements​